Letter from the Maidenhead Constituency (updated 9 May) 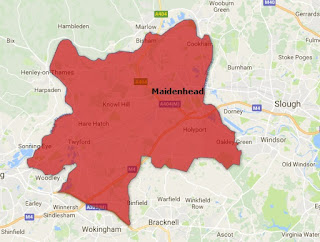 I lived in Maidenhead for over 25 years.  My kids were schooled there.  Theresa May, Prime Minister, has been MP there since 1997.  The question is whether she will be the MP after June 8th?

"Of course she will" I hear you say.  But not so fast!

The Maidenhead constituency consists of parts of two unitary authorities:
RBWM voted 54:46 to Remain in the EU Referendum last June. Wokingham was 57:43, despite arch-Brexiter John  Redwood being the MP for the town.

So it's clear that Maidenhead voted Remain.  Theresa May campaigned for Remain last year, with strong logical arguments against Brexit.  Voters don't like a turncoat, a flip-flopper seemingly putting career over country.

In the General Election in 2001, Theresa beat the LibDem candidate Kathy Newbound by only just over 3000 votes.  Around  this time the LibDems ran the local council.  There was a solid centrist tendency in Maidenhead, which still exists.

Despite this, the LibDems candidate for 2017, Tony Hill, was firmly trounced in 2010, and in 2015 was beaten into third place by Labour.  That could well be the case again in 2017, subject to a national LibDems revival.  This hasn't happened yet.

Theresa's majority in 2015 was so large, the question is actually who could split the Tory vote?  The candidate would need to be:
In other words, in the absence of anyone else, a candidate for the Just Political Party.

So what are voters thinking now?

Before I went, I spoke to a uni friend who served as a diplomat for the Foreign Office and was Chief Exec of hi-tech businesses.  Likely to be a true blue Tory, how was he going to vote?  "Not Tory.  No way." was his immediate response.  The same goes for others in Maidenhead.

I then spoke to another uni friend in Maidenhead who has been a main Board director of two FTSE100 companies. "Sadly Theresa" was his response.  Not exactly inspiring!

Another friend and colleague runs the Food Bank in Maidenhead.  (Yes you read that right.  A food bank.  In Theresa's constituency!).  He was away.  I'll get his thoughts when he's back (see below).

A chat with a friend who has been captain of Maidenhead Golf Club was unconvincing. He'd just left the course, and talk had been more about how to get that ball into that ruddy hole! (Golfers, eh?  Do they think of anything else?) - see below for an update.

So off to Maidenhead.  Theresa made a literally flying visit to Maidenhead on Saturday morning on her way to Scotland.  I heard about her visit too late to get there, and arrived mid-afternoon.  Not a single indication of a General Election.  Nobody yet prepared to campaign?  Not worth bothering?

The eateries are staffed by eastern Europeans.  Fearing for their future.

Chats with people in the street were mixed, but typically similar to one lady who said "I'm not happy with the Tories, but will vote for them if nobody better."  Sounds like the polls are exaggerating the true level of Tory support.


Update from Saturday 6th May

Back to Maidenhead the following Saturday.  The only party to set up a table in the High Street was Labour.  Pat McDonald, their candidate, was there bright and breezy at 9.30 ready for their 10-12 licence.  He told me:
Anyone recognise the journalist to whom Pat was talking?  Hint: Not from the UK media. 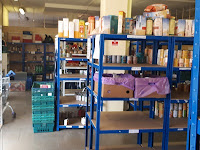 I then visited the FoodShare foodbank in King Street.  Great facility, fantastic people and I'm now a volunteer.  Folk get a voucher from one of various local services, and collect their food Wednesday evening or Saturday morning 9-11.

But a day in Maidenhead wouldn't be complete without a visit to Carters Steam Fair.  They over-winter in White Waltham, in the heart of the constituency, and tour the SouthEast in the spring, summer and autumn. Just twice a year in Maidenhead, they were at Pinkneys Green that day.

Update from Tuesday 9th May

Today I visited Maidenhead Town Hall to hand in the Nomination forms for The Just Party candidate in the Maidenhead constituency.

A key issue up and down the country is Housing, and the need perhaps to huild on green-belt land.  For Royal Borough of Windsor and Maidenhead (RBWM), they own land right by Maidenhead train station currently leased to Maidenhead Golf Club. It's very tempting to develop it.

I popped round to see a recent Club Captain. The Club has a quandary.  Wait until the lease runs out, and potentially be thrown off with nothing. Or take some money sooner which can be used to build a new course and Club out of town.  What would you choose?

Whilst at the same time locals are concerned the "lungs" of the town will be concreted over.  Squaring that circle of competing objectives will take some time!


Winning Maidenhead off the Tories

So Maidenhead is winnable by a centrist candidate who wants to soften or stop Brexit.  It can't be Labour, with a Brexit candidate and party policy.  It won't be the LibDems on recent form.

Step forward The Just Political Party candidate for Maidenhead.  Julian Reid. .International businessman and experienced negotiator at the highest levels of government.  Profile to follow.  If Macron can win in France, so can Reid in Maidenhead!