Where Do Voters Put Themselves On The Political Spectrum?

It has long been known that the party that best appeals to the centre ground of politics wins a General Election. New Labour in 1997. The Cameron win in 2015.  What hasn't necessarily been obvious is quite how polarised the electorate are.

ComRes asked voters in late 2014 where they thought they stood on the political spectrum.  The result was crystal clear.  A significant majority think of themselves as right in the middle, whether they voted for a major party last time (bottom line) or the electorate as a whole (the top line):

A few more people think themselves right of centre compared to left of centre. Very few are "hard left" or "hard right".  But that is exactly where the Labour and Conservative leadership have taken those two major parties.  The majority of the electorate are not directly served by a mainstream party.  They are forced to vote for who they dislike least, abstain, or indeed vote against who they don't want.

It is now The Just Political Party's role to provide a party that centrists can actively vote FOR.  Will you? 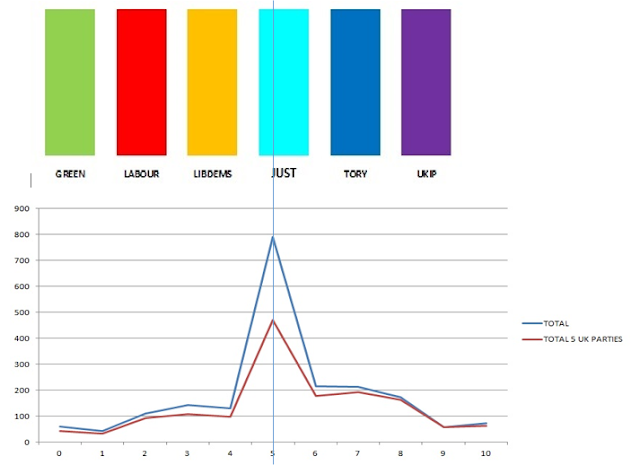