Will the DUP Deal be the Downfall of the Tories? 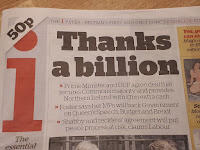 QTWTAIN is the scourge of newspapers.  It's a technique often used by the Daily Mail, especially in their Health section.  But it is banned at the Telegraph.  John  Rentoul at the Independent is an especially vociferous opponent.

What does it mean?  It's a headline with a "Question To Which The Answer Is No".  For example, today's offering in the Mail is "But are trendy snacks TRULY healthy?"

So how about this headline:  "Will the DUP Deal be the Downfall of the Tories?" 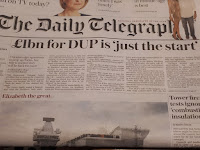 Emily Thornberry, the Labour Shadow Foreign Secretary and a lawyer by background, has said it is a "shabby and reckless agreement" that will put the Northern Ireland peace process at risk.  This echoes comments made a few days ago by former Prime Minister John Major.

Gerry Adams, the Sinn Fein President, has added it threatens the Good Friday Agreement.  Even The Tory Telegraph has announced "£1bn for DUP is just the start".

The deal certainly does look reckless.  A desperate attempt to get the Queens Speech through the initial votes, and force Brexit legislation through the Commons.

Grant Shapps, a former Tory Chairman, today blamed the hung Parliament on "the world's worst manifesto" from the Tories for the recent General Election.  A 20 point lead in the polls was lost,  in part also due to Jeremy Corbyn pumping out bribes to younger voters.

So what will the public's reaction to the DUP deal be?  I suspect a major backlash on the Tories.  There's certainly little chance that this blog's headline will be a QTWTAIN.  The DUP deal could well be the downfall of the Tories.

The only question is when?  We are asking at least 10 Conservative and Labour MPs to defect to The Just Party as a means of stopping Brexit, and neutralising the DUP deal.  So sooner rather than later, it is hoped.

If you believe it is in the UK's best interests to stop Brexit, and many MPs do, then do form an orderly queue at The Just Party's door!
Posted by . at 07:28