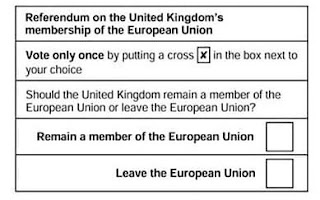 However it isn't that simple.

In 1973 the UK joined what was then called the European Community (EC) for purposes of being a member of the 'Common Market'.

In the UK, for a long time goods and services have been able to move from Lands End to John O'Groats without having to stop at border posts between counties, and without duties and tariffs being applied along the way.  The idea of the 'Common Market' was for that to be the case across the borders of member countries.  Economic activity would increase, and greater prosperity ensue.

Over the years the EC became the European Union (EU). Just like people can move freely from Scotland to live or work in the South East (and vice versa), the principle of 'free movement' across the EU was put in place.

Just as the EU has evolved, the 'Common Market' has morphed into three concepts:

In simple terms:
Further details can be found in this BBC article.

There is one issue which the EU has identified as one of the top three to be resolved before any new trade deal is put in place.  The land border between Northern Ireleand and the Republic of Ireland.

This would remain open if the UK remained in Single Market or Customs Union.  But a Free Trade Agreement would almost certainly mean border controls between the UK and the EU countries, including between Northern Ireland and the Republic.

SO WHAT IS MEANT BY 'HARD' AND 'SOFT' BREXIT?

Given the various options, plus the possibility of a new style of relationship between the UK and EU, it is better to think of 'harder' and 'softer'

A proper 'hard' Brexit would mean leaving the Single Market and Customs Union.  A softer Brexit would involve remaining in one or both, or some other arrangement that retained elements of them.

The problem is that a form of Brexit that meets the desire to stop free movement and lose the jurisdiction of the European Court of Justice, would mean a 'hard' border between Northern Ireland and the Republic. To maintain free movement across that border would mean a softer Brexit, and inevitably compromise on Leave's objectives.

SO BACK TO THE 2016 REFERENDUM

The fundamental problem is that the referendum question was not specific about the options that were feasible without being a member of the EU.  Maybe that was deliberate, to give the government wriggle room in negotiations.

The Government published a leaflet titled "Why the government believes that voting to remain in the EU is the best decision for the UK".  This was delivered to all households in the UK

This did not specifically say that leaving the EU would mean leaving the Single Market and Customs Union, but did state that only "Remaining inside the EU guarantees our full access to its single market".

Some people say that it was clear that leaving the EU would mean leaving the Single Market and Customs Union.  Indeed some people on both the Remain and Leave sides said that.  But there were also those who pointed at Norway and Switzerland as possible models for the UK's relationship.  It was all very confusing.

Ultimately though, the referendum question about leaving the EU did NOT rule out the possibility of remaining in the Single Market and Customs Union, like other non-EU countries.  Given the question was written that way, that flexibility was actually what people voted for.

WHERE ARE WE NOW, AFTER JUNE'S GENERAL ELECTION? .

The Tories have been talking about a 'hard' Brexit for some time. Many influential Tories simply want a complete break with the EU, at whatever cost to the economy. 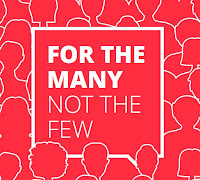 A lot of people voted for Labour.  What has Labour said?  The manifesto says:
There  has been talk about "access" to the Single Market, other than membership.  Yes, all countries have "access", albeit under rules that are more or less punitive.  Now we have "benefits of".  John  McDonnell, the Labour Shadow Chancellor, has now said Labour would expect to leave the Single Market.  So what does "retain the benefits of the Single Market" actually mean? Nothing, it would appear.

WHAT ABOUT THE 'NO BREXIT' OPTION?

It is not too late to realise that any form of Brexit would damage the economy, potentially seriously. Looks liek a  transition period of ten years or more where the economy would suffer, tax receipts would be lower, and essential services starved of funds.  "Project Fear" or just common sense?